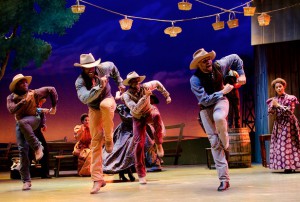 The Cowboys and the Farmers think Everything’s Up to Date in Kansas City!

“Oklahoma!” opened at Portland Center Stage on Friday September 23rd. This is the all African-American staging of the story, thanks to the vision of PCS’ artistic director, Chris Coleman. I was fortunate enough to coach the show, and as usual, Chris gave full support to my contribution to the production.

When I read the script and considered our options… as I meditated on the potential for this show to tell its story in a powerful new way… I knew I wanted to coach this show in AAVE – African American Vernacular Dialect.

Both a language and a dialect by linguistic definition, AAVE is most likely a blend of West African languages, British English, and the relatively new Southern American English of the time. It contains, as all languages do, its own grammar and syntax, its vocabulary, and its good and honorable reasons for the song it sings.

As to how this relates to the dialect spoken by African American settlers in Oklahoma, I stated this in the dialect materials I gave the cast at our first meeting:

“They came from every state, most from the South: Alabama, Mississippi, Georgia, North and South Carolina, Virginia, Kentucky, Louisiana, Tennessee. They brought what they could, and carried with them their values, traditions… and dialects. This means that regardless of where the migrants moved to, they brought their sound with them. The dialect didn’t change significantly once the migrants arrived in their new homeland – and their children, and their grandchildren, and now great great great grandchildren still manifest the dialect of their Southern roots in speech and syntax… as though still carrying the bundles and bags their forebears brought with them when they left. There are many sociological reasons why African Americans maintained their dialect: cultural identification; geographic isolation; limited external influence, and a desire to keep something that could not ever, ever be taken away. African Americans, slave and freed, no matter their socioeconomic standing; whether rural or urban – no matter who they were, and no matter where they were, their distinct sound could not be taken from them by bigotry, law, or lynch mob. The beautiful sound was theirs, a jewel, this music: their ears heard the sound of a voice in the fields, and they knew – it is he, my father. My mother. A stranger, singing as he comes up the rise – but we know him. He is us, and so… we are safe. We are joined by another for supper tonight, in fellowship, not fear. In friendship, with shared needs and shared strength… our brother, our sister, who sounds like us.”

I had no idea what we were about to embark on at that first meeting – but it all became clear to me on opening night. These actors, thanks to their talent and commitment, have made history. They have created something newborn, and magnificent: a shining anthem to the infant America.

On that flat plain they spoke and sang, full-throated, of love, and mercy, and longing. Mostly, it was about hope, I think – that emotion demanding the richest courage – hope for the newly freed, the immigrant, the workers, the women. Hope.

And on the actors’ open faces — I saw hope there, too. On that stage they are telling their American story – a tale formerly the provenance of one race only.

But never again! History was made on Friday night, and in that way history has, that upward-moving way, we cannot return to a time when this story did not belong to us all. We are tasked to move purposely forward.

I believe we are asked to tell the story of this production, too, because of what it is trying to say to us about new land; new territory; new vision. Let’s have that conversation together, can we?

There are two stories being told at Portland Center Stage right now, and both are transcendent. Both give me hope, and make me brave.

Today marks the launch of YOU, diary… a place where I’ll share good ideas, bad jokes, great recipes, other people’s poetry and bits and bobs about my life.

And diary, I hope a few friends might stop in every so often to see what I’m up to, and share their own news, too.

And before I go a moment further, a few thanks: to Tim, Keith and the gang at DHX Advertising for their work on the www.marymac.com and the Diary… see their work at dhxadv.com; to Kevin Ginger at KGinger Consulting for his support… look for him at kginger.com; to Owen Carey for making me look so good – check him out at owencareyphoto.com… and to the inimitable Steve Alexander for being the best darn editor and amanuensis a girl could ever ask for.  He’s at redcat.steve@gmail.com

Finally, to Madeline for being Madeline, and to Finnegan and Sullivan for always wagging their tails when I come home.  (That’s Sully in the photo, by the way!)

PS Want to know what I really get up to when I’m working as dialect coach?  Take a look!